These are instructions that allowed me to migrate over a large library of EM12c jobs from an existing, split EM console, (Linux) and OMS Repository(Windows) to a single server environment without requiring me to recreate them new.

Disclaimer**
The migration is a multi-step process that was performed on:
A NEW EM12c 12.0.1.0 with the latest bundle patch, OS 64-bit Linux
11.2.0.3.0 repository
a FULL backup of the OMS repository before performing.

A full documentation of your EM jobs that are up to date!

I have not attempted this on any other platform or environment and I strongly recommend that you start with a fresh OMS repository, new EM12c with the bundle patch and secure backups if you do not want to have to go back and recreate repositories or re-install!

If you do not have a lot of jobs, then just recreate them, but this challenge came about because I had 52 complex EM jobs that recreating would have impacted the production environment and I had to have a way to migrate them with as little downtime as possible.

Challenges ahead
Jobs are identified in the internal OMS tables by TARGET_GUID. As this is a brand new EM and no targets exist or will be migrated as part of the process till the final steps, invalidations and constraint issues should be expected.

During outage scenario- Shut down the agents on each of the targets and remove the agent homes.

Deploy the agents from the new EM12c server to the targets.

Edit each job, removing the old db listed in the “General” tab and add the correct database, (same name, but the Target GUID has changed underneath in the new EM when the agent was deployed…)

Submit each job to the system and you have completed the migration.

First challenge- what tables are involved in the Enterprise Manager jobs?

Use the results from this query to build a parameter file for a datapump export:
Export Datapump Parfile

On both databases ensure you have a directory to work from:

Export out the sysman jobs using the par file as the sysman user. The MGMT_JOB table has fine-grain control on it,
but as we only want the sysman jobs brought over, we do not want to write over the metadata that exists in this table, only append to it.

FTP the file over to the new (destination) EM server.

On  the new server, bring down the local agent:

Bring down the console and the OMS:

Disable the constraints using the script found here:
Disable Constraints
Import in the data to the database using the following parameter file for datapump:
Import Parfile

Simply execute the following command with your proper information:

If you do not use the parameter in your par file:

You’ll receive the following upon import:

The output from your datapump import should look like the following:

Once the import has completed

-Re-enable constraints-  19 will remain invalid due to the Target GUID differences from the old OMS repository data and the new one, (the script is down below!)

-Start OMS and the agent.

-Log into the console and verify the jobs are showing in the library: 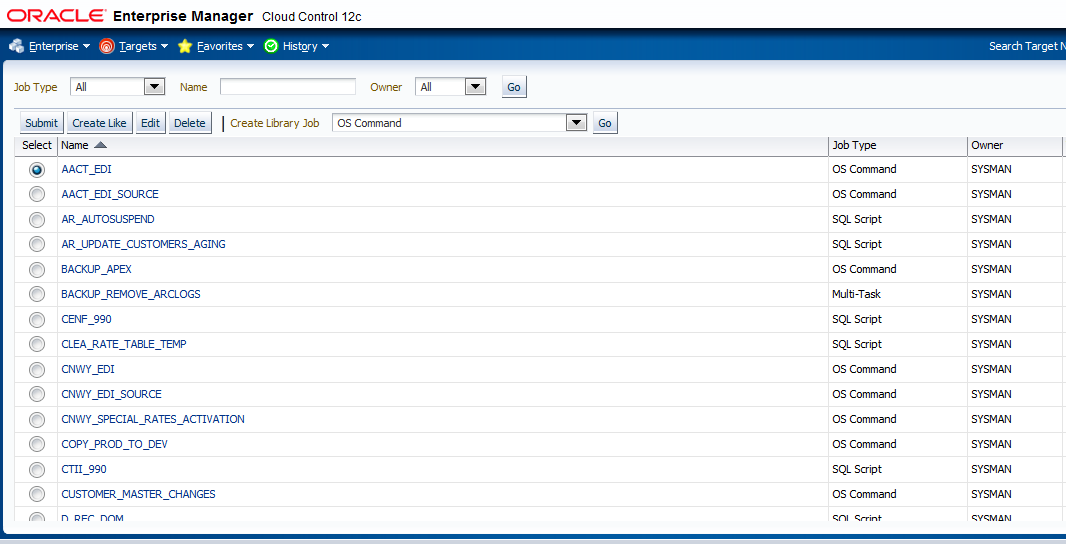 Once you have your official window to migrate over, you will need to perform the following:

-Shutdown the agents on the servers that are migrating over.

-Deploy the agent from the new EM12c.

Once the agent is deployed and the targets are uploading to the new OMS, edit each job to update the Target GUID discrepency from the migration.

You can verify submissions by looking at the activity view, filtering by “scheduled”.

Once all jobs have been updated with the correct Target GUIDS, then you can compile the last 19 constraints.
Enable Constraints

Did you run into a snag, need to start over?

Ensure all the following is shut down

-EM agent.
-The OMS Repository
-The DB Instance, ensuring you pulled your backup tag before you shut it down!

Remember to recreate your datapump directory you were using, if not a standard one!

OK, back where we started before everything got out of hand! 🙂
Sometimes the Repository db will not leave a pending state in the EM console after the restore.  If this happens, remove the OMS db from the EM console and simply re-add.  It will then update everything and all targets will again upload correctly.

4 thoughts on “Migrating Jobs in Enterprise Manager 12c- not for the faint of heart… :)”