I am a long time supporter of Samsung products- I’ve always had Samsung phones, (currently a Note 3 owner…) Samsung TVs, monitors and even have a Samsung microwave and refrigerator. I love Samsung products and this has included my tablets, recently deciding to upgrade my Samsung Note 10.1, (original) for a Samsung Note Pro 12.2.

I have nothing against Apple/Mac products. I think they are great, but I’m a long time user of Windows, (it really does what I need…) and I have always loved Android OS.

When it came to the Samsung Note Pro 12.2, I found the size and business apps appealing. The idea that I could have a full size keyboard, which seemed still out of reach with my 10.1 was frustrating for me, as I am a command line girl, so love my typing. The quad-core processor and LDRAMM looked impressive and the reviews were promising.

…So Friday I purchased one on my lunch break and brought it home. I’m a long time Android user, love it and set it up to start restoring, (which has always taken about an hour for the main iterations and a couple hours to restore my main apps…) We are about to switch over from Comcast, as some know, there is a lot of new homes being built out just west of our neighborhood and our connectivity started taking a hit about 5 weeks ago. With the slow recovery, I was sure it was the network, but later into the night and the next morning, I wasn’t able to log into most applications and the restore was only about a 1/3 along. I noted that 60% of the battery use was the screen even though I’d been sleeping. The more I used the tablet, the slower and slower it became to the point of unusable for anything requiring a connection to the internet.

I thought I would verify that everything was coming over correctly from my old tablet and that was when I was served the surprise of my life- my old tablet was putting the new one to shame! My old 10.1 with the dual-core processor was running like a champ and wasn’t impacted in anyway like the new one. I started to do some informal tests between the two and even after running Cleanmaster to remove any cache issues, etc., the old one left my brand, spanking new Samsung tablet 12.2 in the dust.

That was when I started to do some more googling, but this time I added the word, “slow” in the searches and sure enough, there was the info I needed. The 12.2 Pro, the TAB and NOTE versions are having issues with slow charging and slow performance when more than one application is open. For me, having more than three apps open resulted in such poor performance that the tablet was seriously unusable.

I returned it and went down the path that I always wondered when would arrive- Yes, I bought a iPad Air. I am pretty happy with it and the keyboard cover is really awesome. I’ll do another review in a couple weeks, but for those that were considering the 12.2 Pro, even the Note, (the Tab version has slower memory) skip it. Samsung needed more time with this one before it went to market and their choice to release it early has driven me from the product line and into the arms of Apple. 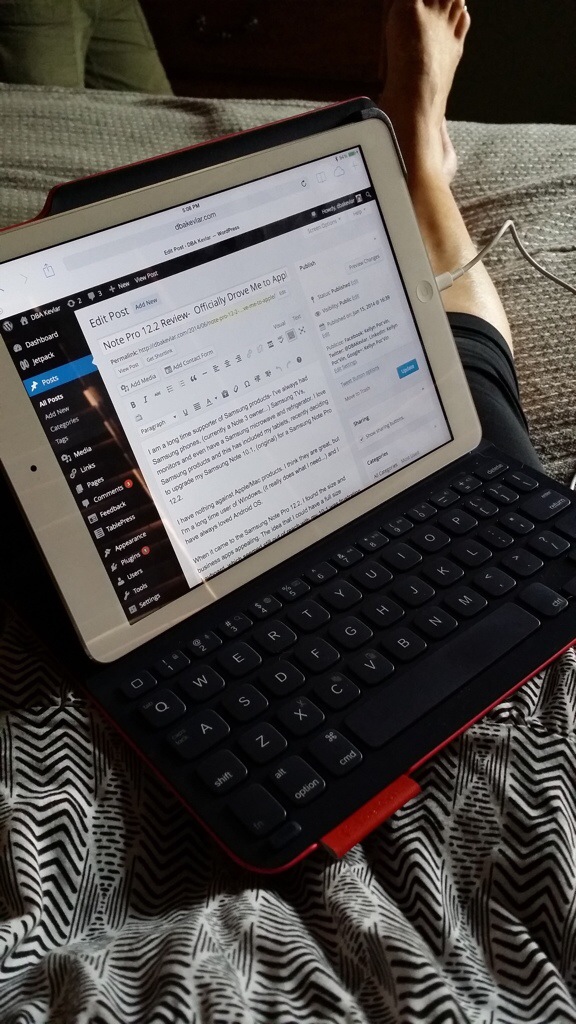 2 thoughts on “Note Pro 12.2 Review- Officially Drove Me to Apple!”

Esme and Josh having an awesome time kayaking today

For my fellow ADHD peeps: 9 Ways To Focus A Wandering Mind. #Infographics https://flip.it/lQJgwY

Went to pick up Josh at the airport and Esme lets out a growl, then he takes his face mask off and she starts to cry and wag her tail. She hasn’t left his side since. I’m now chop liver... lol