Thursday started out calm, self-assured that I knew where I needed to be all day and was prepared.  I tweeted happily that I had found a lovely spot to work during the keynote, (day job!) 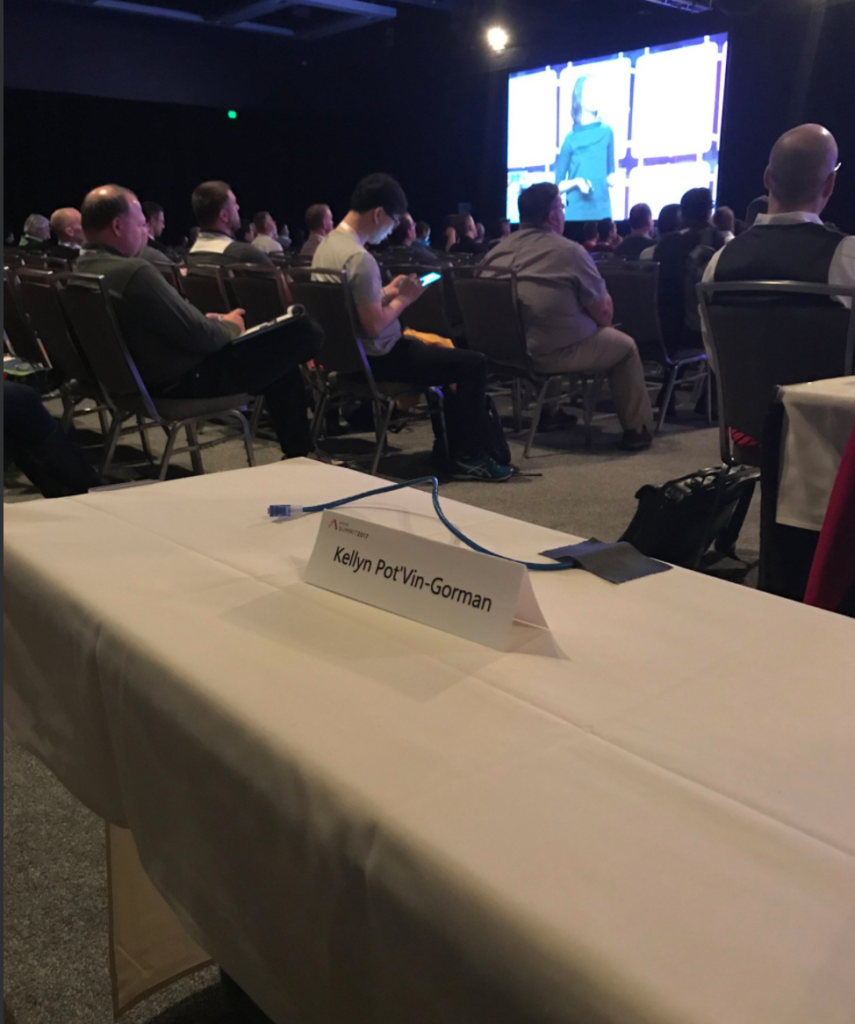 At the keynote, there was a table with my name on it where I was supposed to be.  Thank you so much to Brent Ozar for letting me know so I could apologize for the miscommunication with the organizers of the blogger table, (which is not the same thing as the blogger meetup-  oops!!)

The rest of the day was crazy busy, but incredibly enjoyable and educational.  I attended Andy Yun’s session on UDFs and Nested Views impact on Optimizer choices to confirm they suffer very similar challenges as Oracle.  I’d always enforced the rule of avoidance from my experience with E-business Suite in Oracle when working with SQL Server just to be safe and his presentation did a great job of using a story and code to explain, although the number of permutations is decided by time vs. quantity like Oracle’s CBO, it does happen and the complexity of next views can impact the ability to choose an acceptable plan.

Next, I played Hobbit and went for first, second and third lunch, (not really, but it was fun to say…)  I stopped into the WIT Birds of a Feather table and hosted a number of fantastic conversations with the table.  I was thrilled to have both men and women at the table and it confirmed that we’re all part of the solution.

I missed the WIT luncheon keynote, as I had to rush over for lunch with my Seattle based fellow Oakies.  Thank you to Kyle Hailey, Jeremiah Wilton and Jeremy Schneider for the wonderful lunch and catching up.  It was great to see you while I was here in the city!

Post lunch, I had an interview with PassTV with SentryOne.  Instead of being in the stream, they made the decision to add my interview into the final broadcast, so I’m looking forward to seeing the final product when completed.

I did get to spend some time in the booth yesterday, but it was only long enough to be told I missed a ton of people who were looking for me, so apologies to all I missed!  Once the booth closed, I headed over to Pass Speaker Idol, which I LOVED!!  It’s an awesome concept-  have folks that have never spoke at Summit, try their hand at speaking in a five minute presentation and judged by five senior speakers from the event.  The winner of each of the rounds goes onto the finals and the winner gets a guaranteed speaking spot at Summit 2018.  This is an incredible way to bring in new speakers and I applaud Pass’ dedication to that goal.

Afterwards, I attended Glenn Berry‘s “Improving SQL Server Performance” session.  Glenn is awesome, (DBA Crush) and he covered many tricks I’d learned over the years to design a Windows server around optimal performance for a SQL Server database, but showed us some great new options with newer servers I was unaware of.  Glenn considers himself more of a hardware guy, (over his SQL Skills peers) but his performance queries have been a standard for me since the beginning of my investment in SQL Server.

The evening was upon me and I bid farewell to my coworkers, who I watched enviously depart for a great company dinner and I went to network, (i.e. do my job…. :))  I attended the Idera party, (everyone was really getting into the band, (I’m not much of a concert goer, so it took me a minute to realize everyone had picked up earplugs as they came in) The band was rocking out and took the term “hair band” to new levels!  I departed after making the rounds and ran into Steve Jones and chatted for a few minutes as I returned to the event center and discussed the Redgate party, which he confirmed would be a smash, but at that point, decided to balance my evening out by proceeding over to game night.  Catherine was nice enough to escort me into the event and I played a lovely game of Scrabble and chatted with Karen Lopez before turning in for the night.

Friday at 10:30am, I have Koffee with Kellyn in the Delphix booth and then I’ll be presenting at the LAST session of the day, (3:15 in room 615), doing a talk on “War of the Indices, Oracle vs. SQL Server”.  This talk will compare deep research done on indexing in the two platforms, then how the engine, memory allocation, optimizer and data storage creates benefits and latency in performance.

What are your sleeping quirks? I have to have my hands and feet uncovered. Blankets up to my neck, but don’t dare cover my feet. Tucked in sheets at the end of the bed? Not when I’m through with it!

Just in case you need it, here’s a dog doing yoga in Italian. You’re welcome.

'Focus on the things you can control': how to cope with radical uncertainty https://flip.it/oiBSkS #selfcare