We’ll start with a disclaimer here- this is my experience and my opinion. NO ONE ELSE’S, just as any link to any blog in this post is. Take it or leave it, I really don’t care, never have, never will- never been one to follow any drummer but my own anyway. 😊

Although the basis for calculating database management systems percentage of business is highly contested, there isn’t anyone contesting Oracle as having the largest percentage of the current database management system business. Don’t confuse this with cloud business or other technology platform-  those are two different things.  One such ranking, clearly shows the scope of what Oracle has accomplished. There are many who whisper of Oracle’s demise and some who state it openly, but I don’t think it’s as simple as live or die. 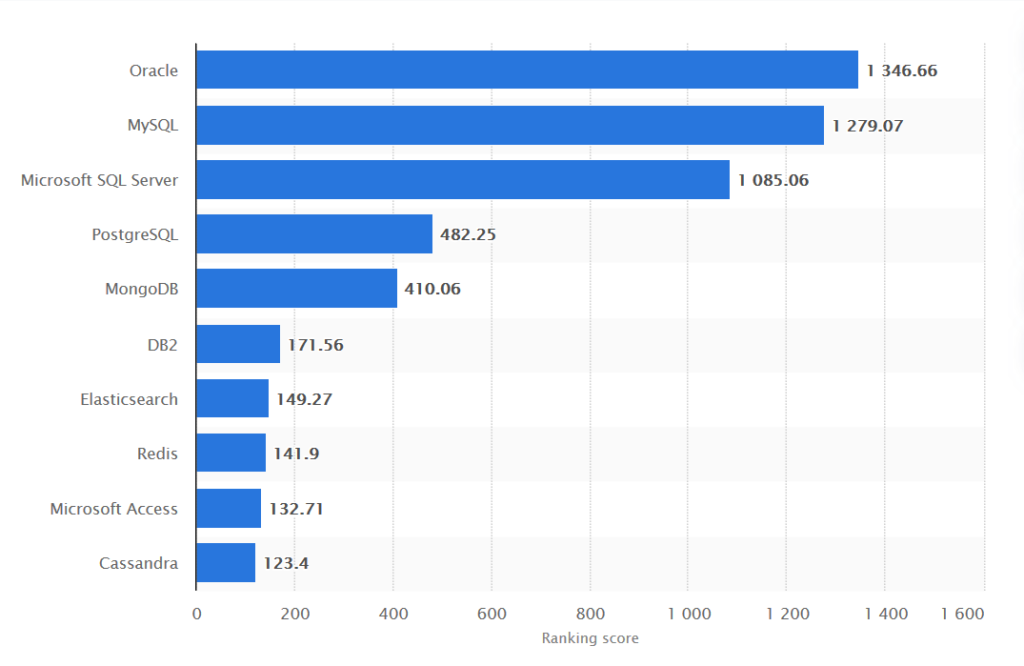 Can Oracle still leverage its lead with the development of the cloud, (more often not Oracle’s cloud) and will it be able to in the foreseeable future?

Oracle’s cloud venture began when Microsoft and Amazon’s cloud platform had already matured, leaving them with the unenviable task to try to catch up. The race required them to move fast with internal resources rarely skilled in cloud best practices, only investing in former AWS/Azure specialists with the build of the latest Oracle cloud, (aka Oracle Cloud Infrastructure, OCI).

I was at Oracle during the beginning of Oracle Bare Metal, (OCI) and was impressed with Oracle’s willingness to open the doors to those who’d already learned how to build a successful cloud at AWS and Azure. I still had concerns about everything connected to the existing cloud, (OPC) and the new OCI cloud. These were skeleton crews split from existing teams sourced from the on-prem products, often choosing to build Oracle’s cloud like relational architecture to limited success. I want to stress again, this was my experience, but I felt sales were hindered for years as pressure for cloud sales increased, garnered by sales quotas receiving no credit from on-prem products. For me, it appeared the crushing scenario lead to lacking sales and audits on customers resulting in fines that were exchanged for cloud credits to make year-end numbers.

Oracle, a company that made its mark by enterprise company buy-in, but as with any company, also needed customer buy-in. It turned to its community of evangelists to promote the cloud, often alienating them with required demands to promote the Oracle cloud and penalizing them for non-cloud work/promotion.

Oracle marketing saw the success from Amazon promoting development embracing cloud at early stages, resulting in a new grass-roots movement that Oracle wished to embrace as well. They’ve done a great job with their Oracle Dev Champions movement as it’s matured, kudos to those involved. Meanwhile, Larry Ellison, Oracle’s CEO/CTO/CMO, proudly stated the beginning of the autonomous database and how companies would no longer need database administrators, which so few realized was the core support for his product. A few of us blogged about the truth of the matter to simmer down the locals to help, but it still frustrated a lot of DBAs. At that time, his keynote, instead promoting how database administrators could start doing more interesting work than deploying or backing up a database, he pretty much sold to the business, telling them they’d no longer need DBAs. These DBAs were often the folks that made the technical decision behind the financial deal makers who signed on the dotted line. The DBAs were the ones saying, “If you want a database, you want Oracle”. These advocates for Oracle were now being alienated by Ellison’s statements and many turned to PostgreSQL, which along with being open source, had similar capabilities and needed a community to support the product into the enterprise arena.  Developers kept starting projects in the clouds, (we see it in Azure, just like AWS has made a huge business doing what they do so well, too!) and database administrators have acclimated, becoming cloud data engineers, DevOps data administrators and other migrated roles with the needs.

I noted the shift very clearly, as I’d always been multi-platform/multi-role. I’d spent most of my early career being told how foolish I was to not specialize, being one of the few that delved into more than one database platform. Suddenly I couldn’t swing a dead cat without hitting another DBA who was becoming multi-platform, often PostgreSQL. It was now cool to embrace more than one technology and be a jack-of-all-trades. There are numerous folks that will say they are abandoning Oracle to go to another platform- I heard the same thing when I went to Microsoft and yet, here I am, still working with Oracle, along with all the cool stuff in Azure. Nothing’s changed- I’m still multi-platform and that’s the way I like it and luckily I’m at a company that likes me just the way I am.

Now here’s where I say-

I believe in using the right tool for the job. In my beloved Microsoft community, they will joke about how expensive Oracle is and the open source community will ask if relational databases are even relevant anymore. Every technology I’ve worked with, no matter how frustrated I’ve become with some aspect of it, has had a glorious feature I’ve adored. There has been a significant use case for each of the products I’ve worked with and I would be loathe without them.  There are Oracle products with impressive design and architecture.  Every product I’ve worked on outside of Oracle has a feature in Oracle they admire.  SQL Server strives for Oracle’s optimizer, PostgreSQL Oracle’s DBMS features, NoSQL wants PL/SQL functions-  you get the gist.

For 2020, I will continue to help customers with the Oracle OCI/Azure partnership and migrating Oracle databases to Azure at Microsoft. Whatever my customer needs to be successful, I will be part of the solution, not part of the problem and I will do this to the best of my ability.

Everyone loves an underdog and when the data clearly shows they aren’t one, which, IMHO, makes Oracle particularly prime for a revival.  I don’t find it productive or smart to corner anyone as failed.  I seem to remember the days when Microsoft was in that corner.