So I transitioned in the last years from having a development lab, to VMs, to the cloud and now, tired of slow WiFi, been happily using Docker for most of my demos.  As of January, the latest upgrade to Windows 10, aka patch version 109, has been like a bad cat fight.

For anyone else using Docker on Windows, it’s very likely that the error “MobyLinuxVM failed to start worker process” is a bane of your existence.  After exhausting the standard attempt to uninstall whatever patches were applied by Microsoft, and post researching a solution, you’d discover its more of a perfect storm, than a single cause.  For me, it includes an anti-virus software that has a tamper-proof mechanism on it.  It’s one of those times I want to shoot myself for following company policy… 🙂

The problem isn’t really with Docker, for many it has to do with Windows now controlling the startup process for Hyper-V, (where previously it was started by Docker) and it failing due to numerous issues post the 1709 patch for Windows 10.  Some have changed permissions, some have disabled and reconfigured Windows Defenders protection, reinstalled products in a particular order, others, like me, also had issues with all the network drivers being corrupted, (which included the Hyper-V network driver.) 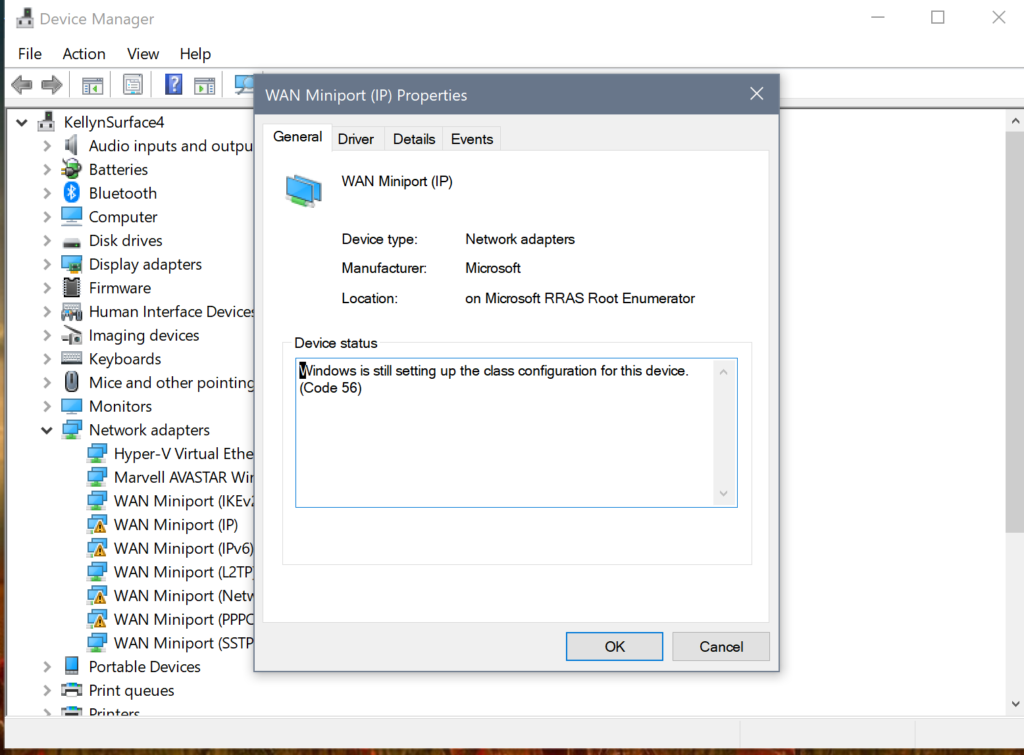 As I had to reinstall my Wireless adapter, I ended up using my Mac to go to Microsoft’s download site and get the drivers, since corrupt drivers weren’t going to correct themselves.  The Code 56 error is a common one at least and took me immediately to the msi and zip files to transfer to a jump drive and get my Surface back online.

I disabled/uninstalled Hyper-V and re-enabled/re-installed Hyper-V post the fix on the network adapters and removed a secondary Hyper-V network adapter added by the Windows patch.  All in all, I can say, this has been one mess of a patch that was pushed out starting in October and has continued to plague not just Docker users, but Virtualbox and VMWare.

Needless to say, since I have a tamper proof Sophos Endpoint on my Surface, I worked through every scenario before finally able to mark them all off as culprits and now have a ticket in with my IT support to download the Sophos patch since the process c:\windows\system32\vmcompute.exe is used by Hyper-V, and conflicts with the Intercept X/Exploit Prevention for Windows 10, patched to 1709. This process needs to be excluded from the Intercept X/Exploit prevention, so if you use Sophos Endpoint and have exhausted all other areas, know that this is your next step in the process to regaining your sanity… 🙂

Wish me luck and I’ll update this post when my Docker is back up and running.

I guess I'm not getting a seat on this plane...