Yep, still doing a lot of database migrations. Just too many people wanting to migrate their other database platforms over to Azure…

I have two customers that have DB2 databases and I know how overwhelming it can be to take on a project like this, so I thought I would go over the high level steps to this project to demonstrate it’s a lot easier than many first may believe. The SQL Server Migration Assistant is your friend and can take a lot of the hardship out of migration projects.

The overall steps to the migration are as follows: 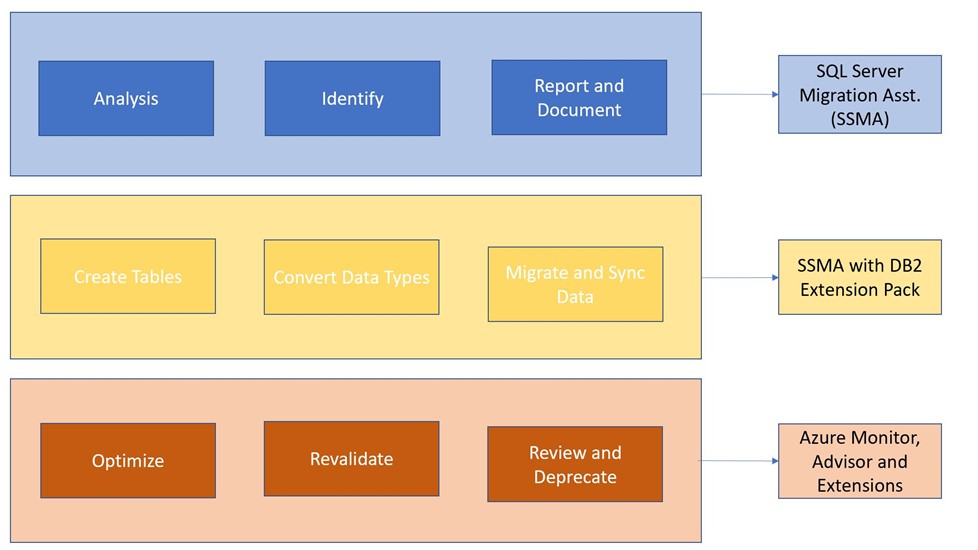 The first step is to ask the right questions coming into a project to determine the complexity of the migration. DB2 has a number of unique scenarios that you won’t find in other database platforms, such as PL/SQL integration to attract Oracle customers and a large set of supported Operating Systems. These are essential part of the initial questions that must be asked to prepare for in the project.

The following is a guideline of questions I would start with, but not limited to, in the first round of DB2 migration questions:

As with any database platform migration, there is terms that must be translated and you also need to be aware of any terms that may have different definitions between the platforms. The term, “instance”, has a different meaning than it does in SQL Server/Azure. Where a SQL Server instance is the installation of the SQL Server “bin” files, the DB2 instance is the default parent database engine, named by default to DB2. Identifying any naming conventions that may have been used differently or confused when migrating is important to deter from mistakes in communication/tasks assigned.

Routines: collection of stored procedures and functions that run inside a DB2 database.

Connection Concentrator: An agent based connector, similar to a listener, but is able to scale and build out 1000’s of web/client connections via applications to the database while only requiring a few physical threads to the actual database.

Materialized Query Tables: This is a reporting table that is based off of a query in its creation statement. They are often used in data mart and warehouse databases.

Multi-dimensional Clustering Tables: The ability to cluster a table along multiple dimensions, creating better performance upon querying, especially those queries that commonly use the same columns in the where clause.

You’ll need the following software to perform the migration in most scenarios, (outside of a unique connector if you want to perform a pull from the SQL Server, etc.):

The next steps are what happens during the migration. It’s a two step process, first migrating the metadata, schemas and verifying all data type conversions are done successfully before you approve and proceed to the second migration step of migrating the data.

One thought on “Migrating DB2 Databases to Azure”