There aren’t too many changes to the Dynamic Management Views in SQL Server 2017, but one was mentioned that I worth a second look and often have a lot more going on than upon first look.

This is an addition to SQL Server 2017 and available in Azure Database/Azure Data Warehouse to simplify and synchronize how we query information about log statistics, not just backups.  The added benefit of this is that it only requires the VIEW DATABASE STATE privilege to utilize it, which eases the demand on anyone who’s tried to grant rights to view backup information to non-DBA personnel in previous releases.  With this DMV, you can monitor, alert and kick off jobs to manage the transaction log backups.

It does require the database_id to be passed to it to provide results, but who keeps that around?  Much easier to just do a Cross Apply to sys.databases and make your life simple.

With the following query template:

updated with various view columns from below, aliases if you prefer and then the database name if you want to specify, you can gather valuable transaction log statistics.

What can you do with this query template with the information shown?

What LSNs are in my Transaction Logs?

For those of you learning about this from the Oracle side, the LSN or Log Sequence Number is like an SCN in Oracle.

This will result in the minimum and maximum LSNs that are currently backed up in my logs for the database for the name given:

Knowledge of backups, both full and log backups are an essential part of, (for on-premises and any IaaS) DBAs job.  We all have our trusty scripts and to produce reports, but there’s been some additions to the DMVs to assist in providing more information in, (what I feel) is a simpler format. 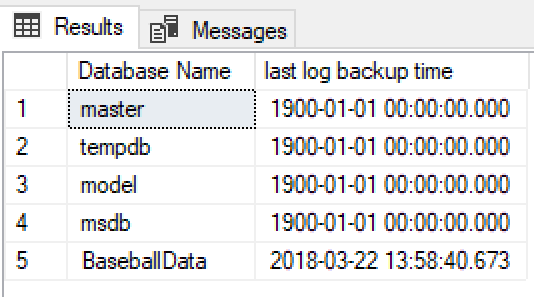 For this example, I took out the addition of a unique database, so you can see that all the databases for this SQL Server were returned and as they are set to “Simple”

I can also monitor the size of the log since the last backup and upon a certain threshold, kick off a backup:

You can also do a small amount of a switch on the template to simply join and pull more refined data from the dm_db_log_stats DMV.  Let’s say we want to return the database name, the recovery model and the last backup time for the transaction log for a single database and we already know what that database_id is:

As you can see from above, I chose to pass the database_ID to the DMV and then join on sys.databases to pull the database name, but to provide the other column data from the DMV.

One area of contention for how SQL Server transaction logs perform has to do with the total number of Virtual Log Files, (VLFs) vs. the number of active VLFs.  If there is a hold up in truncating VLFs, (too many are held with a “lock” stopping it from truncating to be reused and the transaction log is required to autogrow, this can create a poor performance scenario.

Due to this, the dm_db_log_stats DMV can be used to monitor the number of VLFs, active VLFs, etc. and then alert when a threshold is reached.  This way the DBA isn’t forced to shrink the transaction log, which could impact overall database performance if it is done regularly, (also a sign of poor code/database design in my opinion.)

And for my small sample database, there aren’t a lot of VLF’s, (vs. a production system which may have 10K or more) but you get the idea… 🙂

2 thoughts on “DMV for Log Statistics in SQL Server”

Me: Just a little hamburger bun won’t hurt me.” My Celiac:

Changing the owner of a schema removes all direct permissions of objects owned by the schema. | SQL Studies https://sqlstudies.com/2020/01/22/changing-the-owner-of-a-schema-removes-all-direct-permissions-of-objects-owned-by-the-schema/