I’ve been going through some SERIOUS training in just over a week.  This training has successfully navigated the “Three I’s”, as in its been Interesting, Interactive and Informative.  The offerings are very complete and the knowledge gained is limitless.

I’d also like to send a shout out to Steve Karam, Leighton Nelson and everyone else at Delphix who’s had a hand in designing the training, both for new employees and for the those working with our hands on labs.  I’ve had a chance to work with both and they’re just far above anything I’ve seen anywhere else.

The Challenge of Patching and Upgrades

Most DBAs know-  If you attempt to take a shortcut in patching or upgrading, either by not testing or hoping that your environments are the same without verifying, shortcuts can go very wrong, very quickly.

Patching is also one of the most TEDIOUS tasks required of DBAs. The demands on the IT infrastructure for downtime to apply quarterly PSU patches, (not including emergency security patches) to all the development, test, QA and production databases is a task I’ve never looked forward to.  Even when utilizing Enterprise Manager 12c Patch Plans with the DBLM management pack, you still had to hope that you checked compliance for all environments and prayed that your failure threshold wasn’t tripped, which means a large amount of your time would have to be allocated to address patching outside of just testing and building out patch plans.

This is Where Delphix Saves the Day

I bet most of you already knew you could virtualize your development and test from a single Delphix compressed copy, (referred to as a DSource.) create as many virtual copies, (referred to as VDBs) as your organization needs to have for development, testing, QA, backup and disaster recovery, (if you weren’t aware of this, you can thank me later… :))

What you may not know, (and what I learned this week) is that you can also do the following: 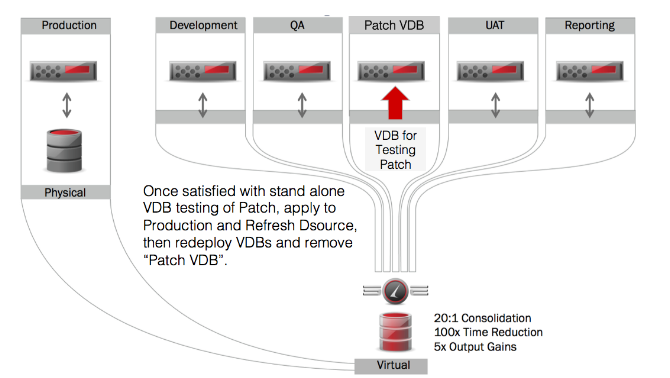 Considering how much time and resources are saved by just eliminating such a large portion of time required for patching and upgrading, this is worth investing in Delphix just for this alone!

Want to learn more?  Check out the following links: